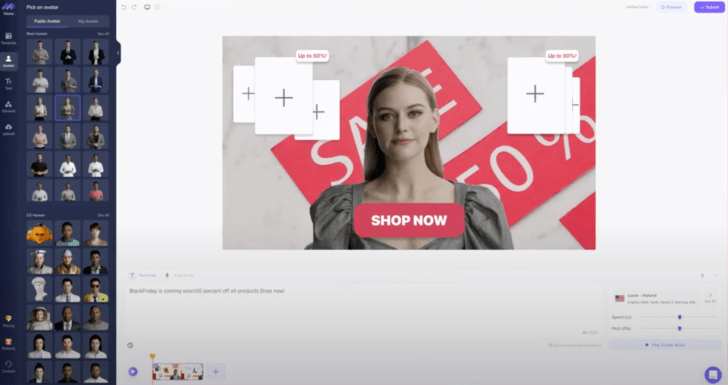 Generative AI is suddenly everywhere. Over the past year, you’ve probably seen people showcasing impressive AI-generated artworks, thanks to progress in text-to-image algorithms introduced by groups like OpenAI and Stability AI. A proliferation of startups is now trying to devise applications for this new class of language model, where the machine is capable of creating new text, images, and videos based on simple human input.

One of them is Movio, a two-year-old startup leveraging generative AI along with other machine learning frameworks like GAN to make videos featuring talking human avatars. The platform is going after marketers with a Canva-style drag-and-drop interface. Users will first pick from a range of templates, be it a theme for a shopping site or a trip to Japan. Then they can add a hyperrealistic avatar to be the video’s “spokesperson”, with speech generated by text input. The outfit, face, and voice of the AI-made human can be swapped with a click.

Movio’s user base is currently in the lower hundreds of thousands, with paying customers nearing 1,000. It has so far raised around $9 million in funding from investors including IDG, Sequoia Capital China, and most recently, Baidu Ventures. Xu met his co-founder and CFO Liang Wang, a veteran of ByteDance and the music social network Smule, when the two were studying at Carnegie Mellon University.

Last year, we covered how Movio, which was then called Surreal, landed a brilliant use case for deepfake. At the time, the company was based in Shenzhen, the hardware haven also known for its vibrant export-led e-commerce industry — most of Amazon’s sellers are from the metropolis. Merchants were using Movio to create promo videos narrated by synthesized humans, doing away with the need to hire real models.

Movio recently moved to Los Angeles, where its co-founder and CEO Josh Xu previously worked for six years as a Snap engineer. That’s because the startup is hoping to capture the wave of marketers who are warming up to AI tools to assist their job.

“We are doing what Jasper and Copy.ai do but for video production,” Xu said to TechCrunch, referring to two of the top AI content helpers of today. “Videos are powerful — just image if marketers can send emails with talking human avatars instead of plain text.”

Movio can only synthesize talking heads for now, but it’s working toward a future where its algorithms can generate whole-body movement, which will allow the company to get closer to its goal of being an “all-in-one AI video production platform.”

The startup charges users by the length of videos, which is correlated with the script they submit, as well as a premium fee from those who use customized faces, a feature that is particularly popular for “corporate training,” according to Xu. Movio has also opened its API to third-party websites, some of which are using its engine to create pop-up customer support avatars.

“AI-generated video is just a small segment within the AIGC [AI generated content] industry. We’ve seen how much text-to-image can do, and I expect text-to-video to bring about even greater disruption when it’s ready,” said Xu.